As indicated by its name, North Charleston sits above Charleston, SC. It stretches up from the neck of the Charleston peninsula and northwest well beyond the Interstate 526 loop, bounded by West Ashley (to the west), Summerville (to the north) and Goose Creek (to the east), as well as the Ashley and Cooper Rivers. The 58.5-square-mile city is heavily developed and a major travel, event, industrial and retail center for the Charleston area. It encompasses parts of Charleston, Berkeley and Dorchester Counties.

North Charleston zip codes include several different areas: 29405 is old North Charleston, the area closest to downtown Charleston, which includes the historic Park Circle neighborhood, the redeveloping Charleston Naval Base Complex and the Amtrak train station; the 29406 zip code bounds the eastern side of the Charleston Air Force Base (which has its own zip — 29404) and includes parts of the city of Hanahan as well as the Northwoods Mall and North Charleston’s city hall; the 29418 zip code surrounds the west side of the Air Force Base and includes the Charleston International Airport, the Boeing aircraft facility and the Center Pointe and Tanger Outlets shopping area; and 29420 is North Charleston’s northernmost and newest zip code, which includes planned communities and the Coosaw Creek golf course.

Development of North Charleston began in the early 1900s, but the city was not incorporated until 1972. Today, the city is accessible by Interstates 26 and 526. Other major roads include Dorchester Road, Ashley Phosphate Road (named for the phosphate mines that contributed to the development of the area) and Rivers Avenue. Interstate 26 is the quickest way into downtown Charleston, but numerous so-called back roads also link the North Area with the peninsula. North Charleston, especially the area within the Mark Clark (I-526) loop, is centrally located and a 15-minute commute to downtown Charleston, Mt. Pleasant and West Ashley. Outside the loop, commute times increase to about 30 minutes.

North Charleston features many parks and recreational facilities, the Charleston Coliseum and Performing Arts Center, a professional hockey team, enough shopping opportunities to keep even the biggest shopaholic busy and much more. There are numerous public and private schools in the area, including the award-winning public Charleston School of the Arts (a middle and high school). Also in the North Area are Trident Technical College, Charleston Southern University, a College of Charleston satellite campus and numerous other higher education facilities.

Housing options in North Charleston are extremely diverse. The Park Circle area in old North Charleston was one of only two English garden–style communities in the United States in the early 20th century. The area is extremely walkable with beautiful parks, majestic oak and pine trees and sidewalk-lined neighborhood streets as well as a lively downtown center with sustainable restaurants and small, locally owned shops. Homes in this area are a mix of older brick homes built in the 1940s to 1960s (price range of low $100,000s to mid-$300,000s) and newer environmentally friendly neighborhoods developed in the 2000s (upper $200,000s to upper-$300,000s). Outside the Mark Clark loop, homes come in every shape, size, age and price, ranging from the low $100,000s to $1-million-plus range, including waterfront and golf course homes. 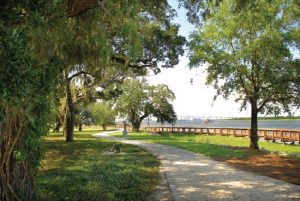