Seabrook Island (zip code 29455) is located to the southwest of Johns and Kiawah Islands and bounded by the Bohicket River to its north and the Edisto River to the east. Just across the Edisto River from Seabrook Island is Edisto Island. Seabrook, a 7.1-square-mile barrier island, is part of Charleston County and about a 35-to-45-minute drive from downtown Charleston. The only way to access Seabrook Island by land is via the Betsy Kerrison Parkway (State Road 10-20, which changes from Main Road to Bohicket Road before it becomes Betsy Kerrison) through Johns Island.

During much of the 18th century, the island was known as Simmons Island and used to grow cotton. Its name changed in 1816 when William Seabrook, a prominent planter of neighboring Edisto Island, purchased the land. (William Seabrook’s magnificent c. 1810 plantation house still stands on Edisto Island.) By 1880, the Andell family had bought Seabrook Island. Around this time and well into the 20th century, logging became a major industry on Charleston area sea islands, but Seabrook is unique in that the Andell family did not sell timber rights. Instead, valuing the natural beauty of the island, they allowed it to remain unaltered. Today, Seabrook boasts stunning old-growth maritime forests and retains a conservation-minded ethos.

By the mid-20th century, about half of Seabrook Island had been given to the Episcopal Diocese of South Carolina. The diocese sold most of the land to a private developer in 1971, and by 1973, Seabrook Island was opened as a gated resort community. The town of Seabrook Island incorporated in 1987 to avoid annexation by the city of Charleston.

Seabrook Island remains a favorite beach vacation destination and includes a mix of single-family homes and villas occupied by full- and part-time residents; some privately owned homes are also used as vacation rentals. Development on Seabrook is limited, and the quiet, secluded island has no high-rise buildings. Amenities include private beaches, shopping, two golf courses, tennis and equestrian centers and pristine nature trails over land and through the marshes. There is a marina on the island as well. 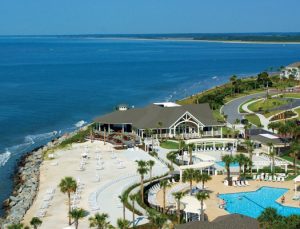