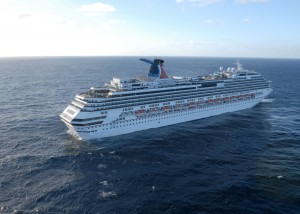 Charleston made history in May 2010 when it welcomed Carnival Cruise Line’s Carnival Fantasy ship as South Carolina’s first permanent cruise ship. Before her arrival, year-round cruises were not available in the area. But the ship’s arrival also sparked a heated debate centering around the impact that increased cruise traffic would have on the charm of the historic Charleston peninsula and the environmental impacts. Charleston’s cruise ship traffic increased from 37,000 passengers in 2009 to 117,000 passengers in 2010.

At first spearheaded by private homeowners who have gone to great lengths to restore and preserve their historic residences on the peninsula and who value the city’s exceptional livability, the cruise ship issue has now drawn national attention; two separate historic preservation organizations — the World Monuments Fund and National Trust for Historic Preservation — have sent a message against increased cruise traffic by placing Charleston on their watch and endangered lists. But in a state that had the fourth highest unemployment rate in the country in 2011, the city of Charleston is working hard to balance tourism income with historic preservation and environmental sensitivity. The reports left Charleston’s Mayor Riley on the defense, but we can also look at the reports as a nod to the fact that Charleston is a historic treasure like no other well worth preserving.

Increased cruise traffic has been criticized for causing traffic congestion on the narrow streets of historic Charleston. The city and the SC Ports Authority (SCPA) responded with increased signage and a traffic plan that directs cruise traffic to use the less busy Morrison Drive exit (219) off Interstate 26 and which limits road closures as much as possible. Currently, the only time roads are closed is during embarkation times, and this only affects two roads. The SCPA also offers an email update system so that residents are kept in the know about scheduled ship stops and road closures.

Cruise ship exhaust and its effect on air quality is a concern, and there are fears that soot exhausted from the ships will accumulate on historic buildings and degrade the cleanliness of the city. Degraded water quality from repeated cruise ship stops is another worry. Charleston has addressed these concerns by limiting the number of cruise ships that can call each year to 104, and only 84 stops are scheduled for 2012. The Cruise Lines International Association also points out that “each cruise ship has more than 60 safety, environmental and health inspections each year” and “cruise line waste management and recycling programs are more stringent than those in most cities and ports.”

Historic preservationists worry about the views of Charleston’s legendary waterways being obscured by the enormous cruise ships and say the ships are getting bigger. The three largest North American cruise ships are Royal Caribbean’s Oasis of the Seas and Allure of the Seas (both with a capacity of 5,400) and NCL’s Norwegian Epic (capacity of 4,200), and Charleston is not currently listed as a departure port for any of these mega cruise liners. The Carnival Fantasy has a passenger capacity of less than half of the biggest ships: 2,056. Mayor Riley says the cruise ships do not affect the best views at Waterfront Park or at the SC Aquarium, especially because only one cruise ship at a time is allowed to dock at the downtown port terminal.

Even the development of the new cruise ship terminal at Union Pier is heavily regulated by Charleston’s Board of Architectural Review (BAR) and subject to public input. A preliminary design was recently rejected by the BAR because it looked too much like a warehouse.

Cruise ship traffic does have the potential to have negative impacts, but it brings much needed jobs to the area, and the city of Charleston is going to lengths to make sure it properly maintains the delicate balance between tourism, livability, the environment and historic preservation.