Back in February 2008, we reported on the mixed-use real estate development on the Charleston peninsula known as Midtown. A partnership of developers had purchased a block between Upper King and Meeting Streets and planned to build a 235-room luxury hotel, 200 or so condominiums and 40,000-plus square feet of retail and meeting space. The project was being compared to the posh Charleston Place development that revitalized the Lower Peninsula in the 1980s. Construction was slated to begin later in 2008, but as we all know, between February 2008 and December 2008, everything changed.

It was not really until the end of 2011 that we began to again hear rumblings of things to come regarding the Midtown project. In January 2012, Clement, Crawford & Thornhill (CC&T) Real Estate Services made public a detailed rendering of the development, anticipating construction to move forward in 2012. A few things had changed since the 2008 plans were unveiled. In 2008, the $150 million project was slated to cover the entire block bordered by Spring, King and Meeting Streets, ending at Cannon Street. But in the four years following the recession, Midtown has been scaled back a bit. Greystar Real Estate Partners has now taken over development of the Meeting and Spring Streets section of the original project, running halfway to King Street. 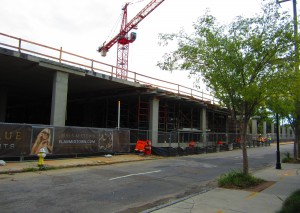 Construction on Greystar’s Elan Midtown is currently underway; it is the first significant mixed-use real estate development project in downtown Charleston in over 20 years. The 200-unit boutique apartment complex will feature 6,887 square feet of street-level retail space, a two-level parking garage, and water-feature-themed central courtyard. As of August 2012, construction of this project is well underway with large pillars and a partial first floor installed along Meeting and Spring Streets. The real estate project’s projected completion date is set for the spring of 2013.

As for the original Midtown development along King Street, large-scale construction is set to begin at the end of 2012. The downscaled project is still slated to include a large hotel — 300 rooms in total — 30,000 square feet of retail and office real estate, and a 400-slot parking garage. The Midtown project will use renovated historic buildings and construct new structures to tie everything together. The project is expected to wrap up in 2014. Most recently, a corner building of the project, the historic former Bank of America building, was sold to the owners of Charleston’s award-winning FIG restaurant with plans for development as an oyster bar and seafood house. The owners hope to open by the end of 2012, calling their new restaurant The Original. Renovation of the old bank building is still underway.

Here are several websites you can visit for updates on the revitalization of Upper King Street:
cctre.com/midtown
elanmidtown.com
eattheordinary.com

We spend a lot of time talking about the “numbers,” but actually seeing the construction projects restart is concrete evidence that the real estate market is making a come back. Bob Brennaman can be reached on the Web or at 843-345-6074 to answer your questions and help you find the perfect piece of Charleston real estate.