First incorporated in 1817 as Moultrieville (a community on the western part of the island named for Revolutionary War hero Col. William Moultrie), the historic beach town of Sullivan’s Island (zip code 29482) was an important military fortification by 1776 and a summer resort community of prominent Charleston, South Carolina, residents (with the southwest tip of the island nicknamed “Millionaires’ Row” for the three- and four-story mansions that were built there, some of which still stand today).

The island itself was named for Capt. Florence O’Sullivan, one of the first Irish immigrants in the Carolinas, who came to the area in 1669. During the 1890s, transportation to Sullivan’s Island improved dramatically, and a second community — Atlanticville — had formed on the eastern portion of the island. The Township of Sullivan’s Island, which included Atlanticville, formed in 1906 after the SC State Legislature revoked Moultrieville’s charter earlier that year.

Today, the 2.43-square-mile Sullivan’s Island has a permanent population of about 1,800 residents, no hotels, and very few short-term rental properties (about 60 vacation homes). Much of the island is preserved through historic districts (US Coast Guard, Atlanticville, Fort Moultrie Quartermaster and Support Facilities, Moultrieville, and Sullivan’s Island Historic Districts) and a perpetual environmental easement (Lowcountry Open Land Trust). Sullivan’s Island is a 15-minute commute from downtown Charleston and even closer to Mount Pleasant, SC. It is accessible from the downtown area by traveling the Arthur Ravenel Bridge (Highway 17 North), West Coleman Boulevard and Ben Sawyer Boulevard (SC Highway 703 East).

The island is bounded on the north by the marshes and creeks of the Intracoastal Waterway, and to the south, are pristine beaches and the Atlantic Ocean. Home prices on Sullivan’s Island range from the upper $400,000s to multimillion-dollar homes. All types of home sizes and architectural styles can be found; the island includes a mix of historic houses dating as far back as the 1830s, newer luxury homes built in the 2000s and homes that date from almost every era in between.

From fishing to sunbathing, town residents and visitors enjoy all the recreational opportunities afforded by the unspoiled beaches and the Intracoastal Waterway, as well as a lively commercial district that boasts restaurants, bars, retail shops and art galleries. Fort Moultrie, operated by the National Park Service, features a visitors’ center, museum, tours and special events. The island is part of Charleston County and the county’s public school district, and it is home to Sullivan’s Island Elementary, which has direct beach access! Popular annual events are Carolina Day, held each summer around June 28 to commemorate the Revolutionary War victory of the Battle of Sullivan’s Island in 1776, and the Polar Bear Plunge, held each New Years Day to benefit charity. 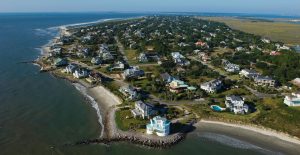 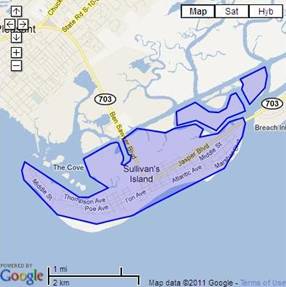