The small, rural town of Ravenel (zip code 29470) is situated along Highway 17 on the outskirts of West Ashley and is the southernmost entrance to Charleston County. The 73.4-square-mile town is marked by tidal creeks, marshes and cypress swamps and prides itself as the “Gateway to the Lowcountry.” Once flanked with early rice plantations, the community known as Ravenel has been in existence since 1859, and it incorporated as a town in 1949. The Ravenel area near Wallace Creek (a branch of the Stono River) was also the site of a Stono Rebellion skirmish. The rebellion occurred in 1739 and was the largest uprising of enslaved Africans in British North America.

During the 1900s, tea was farmed in the area. And cattle has been raised in and around Ravenel for over a century. Ravenel is still a supplier of all natural, grass-fed beef to the Charleston area. Today, the town remains rural, but it is growing thanks to its proximity to Charleston. Ravenel is a half-hour drive from downtown Charleston, even closer to West Ashley and just 10 minutes from the Mark Clark Expressway (Interstate 526) onramp. Highway 17 connects Ravenel to the Beaufort area, and the Interstate 95 onramp is less than 50 miles from the town.

Charleston County Parks and Recreation’s Caw Caw Interpretative Center is located in the town and features history exhibits, more than six miles of trails and boardwalks and habitat for rare animals, such as American alligators and bald eagles.

Ravenel is served by three public Charleston County school district schools — an elementary school in Ravenel, a middle school in the nearby town of Hollywood and a high school on Johns Island — and there are nearby private school options as well.

Known for its country living, Ravenel has many land lots available for custom home building — the Wallace Creek area provides beautiful wooded and waterfront lots with deepwater access. Gorgeous newer luxury homes with waterfront and marsh views on multi-acre lots are also available in the $500,000 to $1 million price range. Even smaller homes are situated on between one and five acres of land, some with natural backyard ponds. These properties start around $200,000. 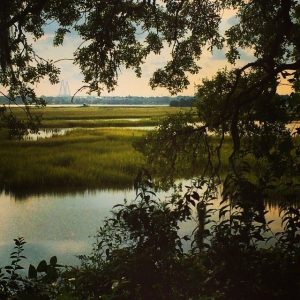