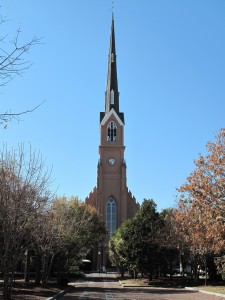 Charleston gets recognized pretty frequently — friendly people, award-winning chefs, luxurious resorts — but it’s not everyday that the city is singled out as the No. 1 City in the United States. That’s what happened on Monday, October 10, 2011, when the November issue of Condé Nast Traveler came out. It was a first for Charleston, and the city can’t stop smiling — in fact, we’re beaming! These same awards also ranked Charleston as the third best city in the world, behind Sydney, Australia, and Florence, Italy.

Each year since 1988, Conde Nast asks its readers to rate their vacation experiences, and this year, more than 28,000 respondents cast 8 million votes. Cities, islands, hotels, resorts, cruise ships and airlines were rated in categories such as atmosphere, ambiance, culture, accommodations, dining and shopping. For all of us living in Charleston, the city’s No. 1 ranking is a no-brainer. Anyone who knows the city holds it as number one in their hearts, but it is quite nice to see ourselves at the top of the list in print as well.

According to Charleston’s newspaper the Post and Courier, the Holy City first appeared on Conde Nast’s Reader’s Choice Awards Top Ten U.S. Destinations list in 1993 as the No. 6 city in the United States, and between 2008 and 2010, Charleston held the No. 2 spot, second only to San Francisco, which has held the No. 1 honor for 18 years!

Conde Nast’s Readers’ Choice Awards are highly respected and used by travelers all over the world as a resource.

Besides Charleston’s No. 1 rating, several other local namesakes made it to Conde Nast’s list. The Sanctuary at Kiawah resort appeared on the Top 100 in the World list in a four-way tie for No. 37. And it was ranked the No. 3 resort in the U.S. Mainland category. The Inn at Palmetto Bluff in nearby Bluffton, SC, appeared as the No. 40 Top Resort in the U.S., and Wild Dunes resort at the Isle of Palms appeared in the Top 150 at No. 121. Also not too far away is Litchfield Plantation on Pawley’s Island, SC — they landed in the Top 30 Small Resorts list at No. 26.

The French Quarter Inn in downtown Charleston was ranked No. 15 in the Top 200 Hotels list, and Charleston Place was spotted at No. 30. Planters Inn, also in Charleston, placed at No. 52, and the Market Pavilion Hotel was ranked No. 62. On the Top 50 Small Hotels list were more Charleston favorites: the John Rutledge House Inn and the Wentworth Mansion at the No. 16 and No. 17 spots. As for Top 10 U.S. Islands, Kiawah Island appeared at No. 3, and nearby Hilton Head Island filled the No. 10 slot.

As far as airlines go, Continental (No. 4), Delta (No. 5), Southwest (No. 7), United (No. 8 ) and American (No. 10) all made the Top 10 U.S. Airlines list, and they all service the Charleston International Airport. In a related note, Japan’s All Nippon Airways (ANA) was ranked as the No. 9 foreign airline, but we are willing to bet they’ll be ranked even better next year as Boeing’s new Dreamliner 787 jets — which are being assembled in Charleston — make their way into ANA’s fleet. ANA has worked closely with Boeing on the development of the innovative jetliner, which is designed for optimal passenger comfort and energy efficiency. The Japanese airline has ordered 50 of Boeing’s Dreamliners with the first one delivered in September 2011.

Congratulations, Charleston — and to everyone else who appeared on the list!

Read the full Conde Nast article here: concierge.com. It highlights the best places to visit around the world.

Here is a video from CBS detailing the honor: