Bobby Hitt, the state’s Commerce Secretary, hopes the British Airways flight between the Lowcountry and London, announced earlier this month, changes all that. “We’ve had numerous examples of where we fought to get a headquarters in one part of the state or the other, and essentially in every instance we lost because we didn’t have an international airport,” Hitt said. “You can’t overcome the lack of access to international travel.”

Having a true international airport within the state’s borders “puts Charleston and South Carolina in a different category” for economic development, Hitt said, elevating the Palmetto State as both a site for branch manufacturing and corporate operations and strategy offices.

Ted Pitts, president and CEO of the South Carolina Chamber of Commerce, said the new U.S.-U.K service “will serve as a catalyst for economic development opportunities as international companies look at where to locate.”

British Airways will operate the nonstop, twice-weekly flights between Charleston International and Heathrow Airport on Sundays and Thursdays on a Boeing 787-8. The service is starting out as seasonal — from April 4 to Oct. 24 — but Hitt hopes there’s enough demand to extend the schedule and perhaps add a third weekly flight.

Aside from boosting tourism, which is the No. 1 aim of the international flight, the hope is that the new service will be a springboard for industrial development in the lower half of the state bisected by Interstate 20. (Credit: Post & Courier) 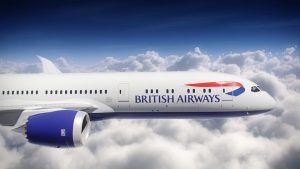