NASA to Broadcast Solar Eclipse this Summer from Charleston. And the Views Should be Fantastic!

The roughly half-dozen balloons deployed in Charleston will be among 50 released by NASA to capture the event, which will be broadcast on NASA’s website and television channel, as well as various PBS stations, the press release said. Scientists and correspondents will be on hand across the country during the broadcast to provide analysis and explanation of the event as it happens.

After starting in Oregon, the eclipse is expected to begin in Charleston around 1:16 p.m. before reaching totality, which will last less than two minutes, at 2:46 p.m. Before it does, it will make its way through 14 states, becoming the first eclipse to traverse the entire continental United States in 99 years. A partial eclipse will be visible across the entire US, but the path of totality, or area where the sun will appear to be completely obscured by the moon, will be very narrow, making residents of the Lowcountry exceptionally lucky. The Lowcountry should move completely out of the moon’s shadow by 4:09 p.m. (Credit: The Island Packet) 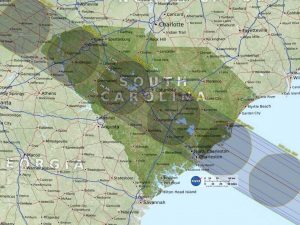