In a few years, The Beach Co.’s master-planned Kiawah River community will be in full swing, with residents moving in to their new homes. “One of the great advantages that we have being here as opposed to … Kiawah Island or Seabrook is really our proximity to downtown,” said Carter Redd, managing director of Kiawah River.

The Kiawah River community is about 2,000 acres of undeveloped land, and The Beach Co. plans to develop about 50% of that for 1,000 residential units, as well as some retail space, a restaurant and some visitor accommodations. Redd said the goal is to have other companies operate the retail and hotel spaces to capitalize on their expertise.

The other half of the property will be left as open space. The community won’t have any gates at its Betsy Kerrison Parkway entrance because Redd said the company wanted the property to feel inclusive.

Instead, visitors will be greeted by a retail space called Farmstead, which will include a restaurant, a shop and a farmer’s market that the public will be able to frequent. Redd said he couldn’t announce the retail company that would be occupying the space.

There’s also going to be oak trees lining the road into the property to help it blend in with the rest of Johns Island, and about 100 acres of agricultural fields that will be actively farmed by the Freeman family, who have worked on the land for four generations.

Construction has just begun — Redd said they’ve been working on building roads and installing water and electric infrastructure per the company’s agreement with the county — but by the end of the initial seven-year phase of construction, about 100 homes will be built on Jack Island, across from the former hunting lodge. The entire project will take between 15 and 20 years to complete. Redd said the company has already begun reserving lots for homes, which range in price from $165,000 to $500,000 in the first phase. 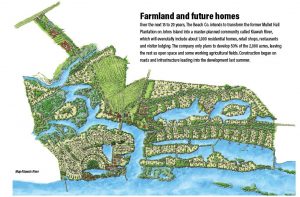