The island once was home to American Indians, American Revolutionaries, possible pirate collaborators, Confederates, slaves, freedmen, and people just trying to make a living. The actual island on which the City of James Island sits is a bit over 35 square miles.  It runs nine miles long and seven miles wide.

The Stono Indians inhabited the island, living among the native pine and hardwood, farming and hunting for food.  Archeologists have uncovered Native American artifacts from as far back as 600 B.C. on the island. When the settlers came to the area in 1670, the Stono Indians initially got along well with the newcomers.  But as we all know, that didn’t last. There was an Indian rebellion of the Stono and the Kussoe in 1674 which did not end well for the Indians.

The island we call James Island was initially called Boone’s Island, possibly after John Boone, who settled here in 1682.  In true James Island fashion, he was banished by the Lords Proprietors for helping the pirates who plagued the coast.  I certainly hope that’s true and that they paid him in treasure. I think we should start digging immediately.

Settlers were given ½ acre lots in the town and 10-acre lots for farming adjacent to the town.  About 1693, James Island appears in the public record. Usually the landowners harvested timber for ships and naval needs, or raised cattle and pig for export (once processed) to the West Indies.  The slave population was lower in the 17th century because of lower labor requirements. In the mid-1700s, indigo and rice became the main cash crops in South Carolina.

The American Revolution and the War of 1812

During this time, of course, the American Revolution affected the island.  Initially, the British held Fort Johnson but the fort was taken by William Moultrie in 1775.  When 50 British ships and 3,000 men were sent to attack Charleston, the fort and its 50 cannons helped hold them off. Later, the British sent Sir Henry Clinton to James Island via Johns Island, and he and his men settled in near Wappoo Cut.  From there, they set up their siege lines to take Charleston, which they did in 1780.

The War of 1812 would see Secessionville (then known as “Stent’s Point”), and Lightwood Plantation (n/k/a McLeod’s Plantation) used for instructional camps.  A battery was built on Battery Island (southwest end of James Island) and on the marsh of the Stono River, known as Fort Palmetto.  No real military action occurred on the island although there was a skirmish on the Stono River.

Throughout the 19th century, malaria waged its own war against the families of South Carolina.  Records show that the mosquito-borne disease was the main cause of death for children.  The planters would move their families to summer homes with ocean breezes in Johnsonville (near Ft. Johnson) or Secessionville by May 20th. The planters’ families would return about mid-October or November, after the first frost.

It was in the mid-19th century that cotton “took over” James Island.  Eli Whitney’s cotton gin, invented in 1793, made cotton easier to clean. Cotton seeds had arrived in South Carolina from the Bahamas in 1786.  James Island’s timber had been thoroughly removed, so much so that plantation homes were shut in March because of dust storms rushing over the island.  The land was ready for a new crop.

In April of 1861 the first shot of the Civil War was fired at Ft. Sumter, from Ft. Johnson. You can visit the site of the first skirmish between Union and Confederate troops at Sol Legare Island  and the Battle of Secessionville (June 16, 1862), where Confederates successfully repelled a Union attack and saved Charleston. When the Confederates evacuated Charleston and the surrounding areas, the Federal army moved in, occupying McLeod Plantation.  The brave men of the 54th and 55th Massachusetts, made up of free black men, were quartered in the slave quarters.  Ultimately, only six homes were left standing on the island.

Reconstruction brought more uncertainty to the island.  Congress directed that anyone who fought or worked for the Confederacy would be subject to seizure of his lands. In 1865, Major-General Sherman issued Special Field Orders No. 15, giving 40 acres from any confiscated lands in S.C. or Georgia to each freedman family.

While many black and white planters continued to farm the land, growing potatoes and other “truck crops”, cotton was no longer an option. A boll weevil invasion beginning in 1910 destroyed the last of the Sea Island cotton business by 1922.  James Island was no longer as valuable as farm land, but the location remained the same: close to Charleston.

The 1940s would see lots for sale in the Country Club Subdivision, as well as the development of Woodland Shores, Wappoo Hall, and Lawton Bluff, even though Lawton Bluff would not be accessible by bridge until 1961.  Centerville was developed in 1952 and Bay Front appeared in 1956.

By the end of ’56, there were twenty subdivisions on James Island, including Laurel Park, Lee-Jackson Heights, McCall’s Corner, Clearview, Eastwood, King’s Acres, Teal Acres, Greencrest Acres, Old Orchard, King’s Acres, Bur-Claire, Riverview, Secessionville, and Clark’s Point. With subdivisions came schools and churches and commercial development.  Subdivisions were built on, over and beside old batteries and other historical sites.

Remembering the past, looking to the future

James Island continues to grow at a frantic pace and it is important to remember the past.  Future columns will explore the history of various churches, schools, organizations, and the contributions of our citizens.  Native Americans, slaves, settlers, planters, entrepreneurs, and families, all have contributed to make James Island one of the best places to live in South Carolina.  There’s a whole lot of history crammed into our 35 square miles. 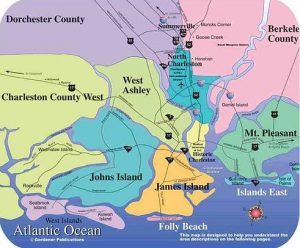 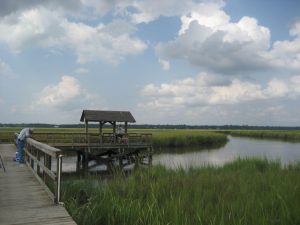