From Boats to Tires: Global Manufacturing is Thriving in Charleston, South Carolina

The favorable business climate, low state taxes, developable land, and skilled workforce has made South Carolina an attractive location for domestic manufacturers and for investment by companies from Germany, France, Belgium, the U.K, and Denmark. If the U.S. would lower the national corporate tax rate, we would not only attract more foreign direct investment, but would attract more American corporations to return manufacturing to America.

Scout Boats in Summerville, S.C., which as a boat builder, is a more traditional type of manufacturer than you would expect to find in a deep-water port community.  A family-owned business, Scout builds luxury center console sort fishing and bay boats. “Today, we have 28-30 models, and our annual sales will be $100 million this year.  For many years, we focused on 25-30 foot boats, but we are expanding to build up to 53-foot sized boats.  We export 17-18% of our boats. Canada and Mexico are our two top markets, but from 2003-2008, our largest dealer was in Athens, Greece, said owner, Steve Potts.

Mark Fetten, president and CEO of Cooper River Partners, LLC manages the Charleston International Manufacturing Center (CIMC) at Bushy Park in Goose Creek, S.C.  CIMC is a wholly owned subsidiary of Pacolet Milliken Enterprises. CIMC is a 1,750-acre industrial complex in a heavy industrial zone, as well as being a Foreign Trade Zone.  It has deep-water access to the Atlantic Ocean via the Cooper River with barge slip access and rail access via a rail spur. CIMC is located less than 10 minutes from two major highways in the region (I-26 and I-526) for trucking products. In addition to the existing tenants, it has 300 acres of developable land.

Robert Brown, is communications manager, and Arthur Dube, business director, Precipitated Silica & Rubber Silanes of Evonik Corp., the U.S subsidiary of Evonik Industries AG, which is a German company that is one of the world’s leading specialty chemicals company. Evonik Industries produces chemicals for a variety of applications, including adhesives, cleaning products, construction materials and employs more than 33,500 people worldwide in more than 100 countries. Evonik Corp. was formed in 2007 in Chester, Pa., and has 33 plants in the U.S., Canada and Mexico. We have about 5,000 employees in the U. S.  The new plant we are building in Charleston will open in June 2018 and produce precipitated silica to supply the tire industry. We will hire about 50 people for this plant. 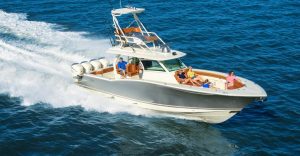