Developers continue to flock to land near the Crosstown Expressway, building mixed-use projects and changing the landscape of this part of downtown Charleston.

At least nine mixed-use developments are in the works in the area bounded by Spring, King, Huger and East Bay streets. Construction has begun on seven of those projects, and more are in the planning stages, according to eight developers.

The Midtown project on King Street, between Spring and Woolfe streets, was the impetus for much of this growth, developers said. Completed in 2015, the project was the culmination of former Mayor Joe Riley’s longtime vision to bookend Charleston Place Lower King Street with another hotel on Upper King.

One block over, the first phase of Courier Square is well underway on land bounded by Line, Meeting and Columbus streets and The Post and Courier’s building. The newspaper’s parent company plans to build a large-scale project over time on the 12 acres it owns near the Crosstown.

The office, retail and residential space will wrap around the project’s parking garage. The apartments, called The Guild, are expected to open early next year.

Some developers said the scale, location and price points of these projects spurred their own decisions to invest nearby. Other real estate executives said they researched markets across the country and chose Charleston because of the region’s job, wage and population growth.

Parts of Meeting and Huger streets near the base of the Arthur Ravenel Jr. Bridge are also changing as development rises nearby. A Maryland-based private investment firm that worked on the Cigar Factory redevelopment  is now partnering with Raleigh-based company to bring new construction to the peninsula.

Federal Capital bought the 72-unit East Central Lofts a few years ago with plans to expand on the 3.5-acre site. Directly next to the existing lofts, a mixed-use project is about halfway complete. It will add 274 apartment units to the footprint — for a combined 346 apartment units — and about 16,000 square feet of retail space, said Matt Valentini, director of development at Federal Capital Partners. The new construction and existing East Central Lofts are now called Meeting Street Lofts.

Across the street from Meeting Street Lofts,White Point Partners plans a 190-unit apartment project at 287 Huger Street next to the expanding Palmetto Brewery.

“Over the past 10 years, Charleston has evolved from a tourist destination to one of the Southeast’s economic powerhouses. … And while jobs are bringing people to the market, downtown is still the selling point for the region,” White Point Partners founder Ryan Hanks said in a news release. “We’re excited to be starting work on Huger Street and expanding the peninsula luxury living options to accommodate the growth.”

Two other developments are underway further down Huger Street. The shell of a three-story office building stands about a block away at 229 Huger Street, with a sign in front that dubs it the “Anniston Building.” County property records say the owner is Eastside Living LLC, and it will have a little over 11,000 square feet with 3,675 square feet per floor and on-site parking.

Pictured: five-story student housing project is under construction at 530 Meeting St. in Charleston. 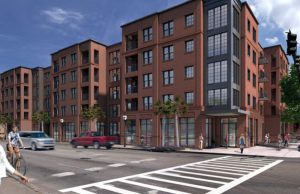