Until 1929, vehicular commerce in Charleston was slow-paced and any trip North-South required a tedious ferry ride across the wide Cooper River. Life would change dramatically in many ways on August 8, 1929, when the 15,000 foot-long John P. Grace bridge was opened. The new bridge was a marvel of 20th century ingenuity, and until it was done, few thought it was possible. Having to span two ship channels at a crossing nearly 3 miles wide, construction took 18 months. The Grace Memorial, and the Pearman Memorial, which opened in 1966, were part of the fabric of Charleston until the last day they carried traffic on July 16, 2005.

Two towering cantilevered spans stretched 150 feet above the river channels, built on massive caissons that plunged into the hard marl more than 30 feet below the river bottom. Huge cranes on rails seemed to be suspended in mid-air as they helped workers hoist miles and tons of steel beams into place. Once finished, the slow, old ferry and cargo boat system gave way to truck farming and direct connection to US routes 41 and 17 that tied Charleston to markets farther North. The old village of Mount Pleasant , once so isolated across the Cooper would eventually grow into one of the state’s largest cities, and Sullivan’s Island and the Isle of Palms would become some of the state’s most popular recreational areas. The old Grace bridge would become a new symbol of a resurgent city in 1978, with the initial Cooper River Bridge 10k run. Now the race is one of the top sport- running events in America, and even though the John P. Grace was replaced in 2003 by the current Arthur Ravenel Jr. Bridge, the old bridge and its impact on the Charleston area will never be forgotten. 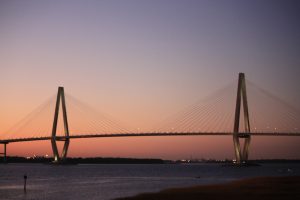 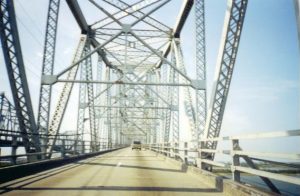