Charleston No. 1 in U.S. for local business growth

Charleston was the top city in the country in the fourth quarter of 2017 for growth in the number of businesses, according to an analysis by Yelp. The online review company credited the region’s population growth and ongoing construction boom for the high ranking. Carl Bialik, Yelp’s senior data science editor, said what struck him is that Charleston’s growth has been consistent for more than a year.

“Because we’re just measuring on a quarterly basis business population growth, you can have these seasonal effects … but Charleston really stands out for having been in the top 10 for each of the last five quarters,” he said. “So there’s a real consistent strong performance under this measure, which reflects a growing local economy.”

This is the second Local Economic Outlook that Yelp has done. The first, which came out in October after the end of the third quarter and placed Charleston at No. 8, focused more on the closure of businesses. The most recent report still examines closings but weighs closings evenly with openings. 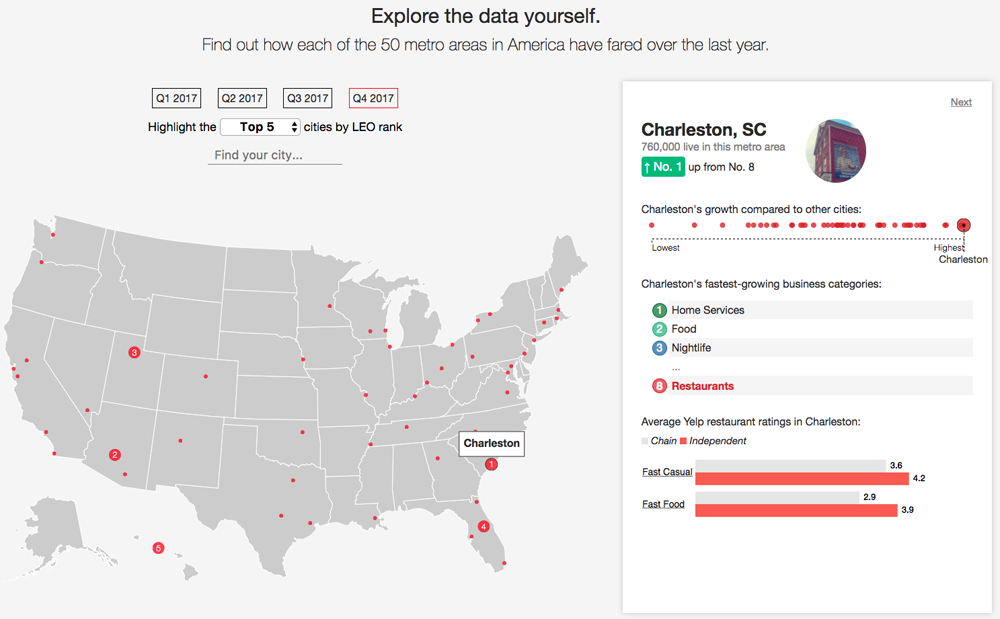 “We think that’s really a fundamental measure to us of the health of an economy,” Bialik said. “You could imagine … that theoretically that if a city or a neighborhood or a category had no new openings, but all the existing businesses were staying open, that that might not be the optimal economic conditions. It’s not a sign of a lot of investment in that sector, a lot of entrepreneurship.”

This report also adheres more strictly to U.S. Census Bureau locales instead of Yelp’s own definitions, which Bialik said allows the report to be compared with other data that uses Census Bureau-defined areas.

“If we wanted to make statements like this area has seen a decline in unemployment and that seems like a strong signal that there are more consumers and more workers and in general more economic activity, we could be more confident that we were directly talking about the same place,” he said. (Credit: Charleston Regional Business Journal)